Teaching Resilience in the Face of Climate Change, The New York Times, December 2, print featured in the Science Times on December 3, 2019.

All Aboard! Place-Based Education in a Different Kind of Classroom, Spotlight on Stewards, PBS Learning Media, 2018

How good teachers are making a difference in Detroit’s multi-ethnic classrooms, Model D, 2017

Out of the Classroom: Learning comes alive when students engage in place-based education, Eastern Magazine: The magazine of Eastern Michigan University, 2017 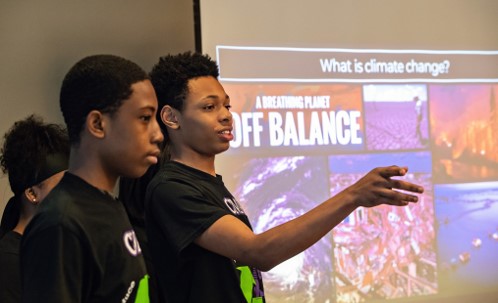 Hot off the press! Place-based civic science--collective environmental action and solidarity for eco-resilience

Photo ID: Three high school students are facing a crowd (who are not seen by the viewer) and presenting the story of their climate change resilience project. There are two male and one female student and one of them is holding out his arm while he explaining an aspect of their learning. This presentation took place at the SEMIS Coalition Community Forum in 2018 at Eastern Michigan University.